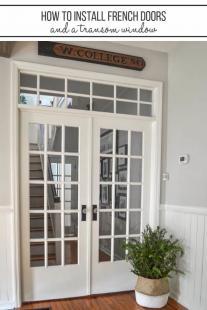 We’re changing things up on the blog! I’ve never had anyone guest post but today I’m making an exception. Give my husband a warm welcome as he shares how he installed our french doors and transom.

This is Jason, and I’m taking over my wife’s blog for the day.

Don’t worry. Tricia will be back for the next post. I might be handy with the DIY stuff but decorating is not my thing.

I knew I was in trouble the first time I came to Tricia’s house. She had a sliding miter saw in her kitchen and a stack of old doors in her basement.

Before we met, she had bought a set of vintage baby poo green French doors off Craigslist for $40. She thought it was sweet that they were used as a wedding prop. Still, they were in pretty rough shape and she had no idea where to use them.

While the wife was at work one day, I decided to surprise her by getting rid of the hollow core door at the base of the stairs, knocking a hole in the wall, and installing her set of vintage French doors. I took it one step further by adding a transom window above.

*An important thing to note is that the french door panes were replaced with plexiglass since it’s at the bottom of the stairs. A better option is tempered glass, but it’s much more expensive.

When this house was built in 1915, the hallway would’ve been wide open. The wall was closed off in a prior remodel which blocked a good portion of the light coming in from the stairwell. It’s also the first thing you see when you walk through the front door.

I could’ve just opened up the wall, framed the opening, and called it a day, but I was thinking of the long-term.

Since we have 2 separate HVAC units for the upstairs and downstairs, there’s no need to heat and cool the upstairs when the boys aren’t here…or when we’re empty nesters.

My thought was, by installing French doors with a transom window, the hallway could be closed off but still feel wide open. So, it’d be the best of both worlds.

So, let’s get down to the steps on how I did it.

First, I measured the doors so I had an idea of the rough opening. Next, I removed the existing door and trim.

Then, I marked the opening for trim and cut out the sheetrock at the desired measurements.

The next step was removing the studs and base plate to accommodate the new opening.

After that, I installed the framework by nailing in studs on both sides and the top plate for the door frame using 1 x 6s trimmed to fit.

Then, I added the frame for the transom window and the door jamb.

Finally, it was time to hang the set of baby poo green doors.

Once the doors were hung, I was able to add the trim work.

My last step was to surprise the wife and then tell her she was in charge of painting everything and ordering the glass. Cause that’s how I roll.

Once we got the glass for transom installed, I added muntins we found at the Habitat for Humanity to make the grid pattern on the window.

And since my wife loved her new French doors so much, it wasn’t long before she brought home another one to put at the end of the hall.

I have to say, it was all worth it and looks like it was meant to be.

I’ll be dropping by every now and then to guest post, so let me know in the comments what kind of DIY projects you’d like me to cover!

Thank you, Jason, for sharing your expertise and thank you even more for transforming my once ugly french doors into something beautiful.

This is the first step of our downstairs hallway makeover. I hope you follow along as I share the rest of the transformation.

To see all the rooms we’ve completed so far in our one-hundred-year-old home, click the link below:

Sharing this makeover on some of my favorite blogs such as:

Previous Post: « [Room Reveal] Guest Bedroom Makeover on a Small Budget
Next Post: 7 Simple Ways to Add a Pop of Green to Your Home »