A funny thing happened while my husband, Jason, and I were sitting on the couch last week watching Fixer Upper.

During a commercial, Jason starts flipping through the latest Ballard Designs catalog. He sees their shutter shelf for $259.00, looks at me and says, “We could totally make that out of those shutters in the garage.”

He gets all the heart eyes when he comes up with spontaneous projects like that.

So, we paused the show, head to the garage and got started on what would become our version of Ballard Design’s shutter shelf for only $7.00!

This solved two problems for us. We were able to repurpose shutters we already had and we were able to make a bathroom shelf for over the toilet to add more storage. Win, win! 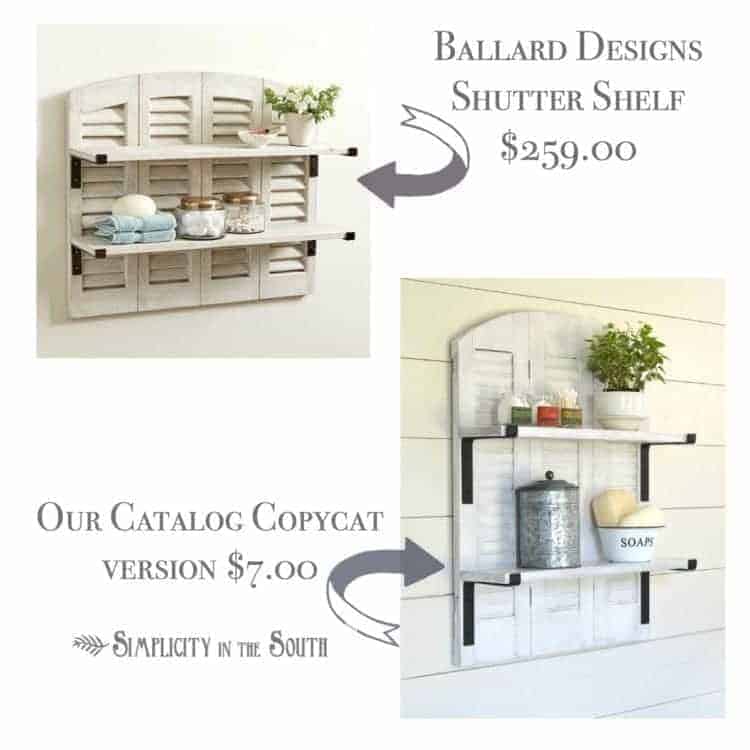 We had everything on hand except the industrial farmhouse style brackets to make the shelf. We couldn’t find anything like them in the store, so we made them ourselves for $1.00 per bracket. Check out the end of the post for the link to the DIY farmhouse metal brackets.

Old shutters (Check out your local Habitat for Humanity, Ebay, Etsy, or Craigslist.) I found these 6 years ago at a local thrift store

We decide to go with 3 shutters instead of 4 because the proportions were better for an over-the-toilet-shelf. 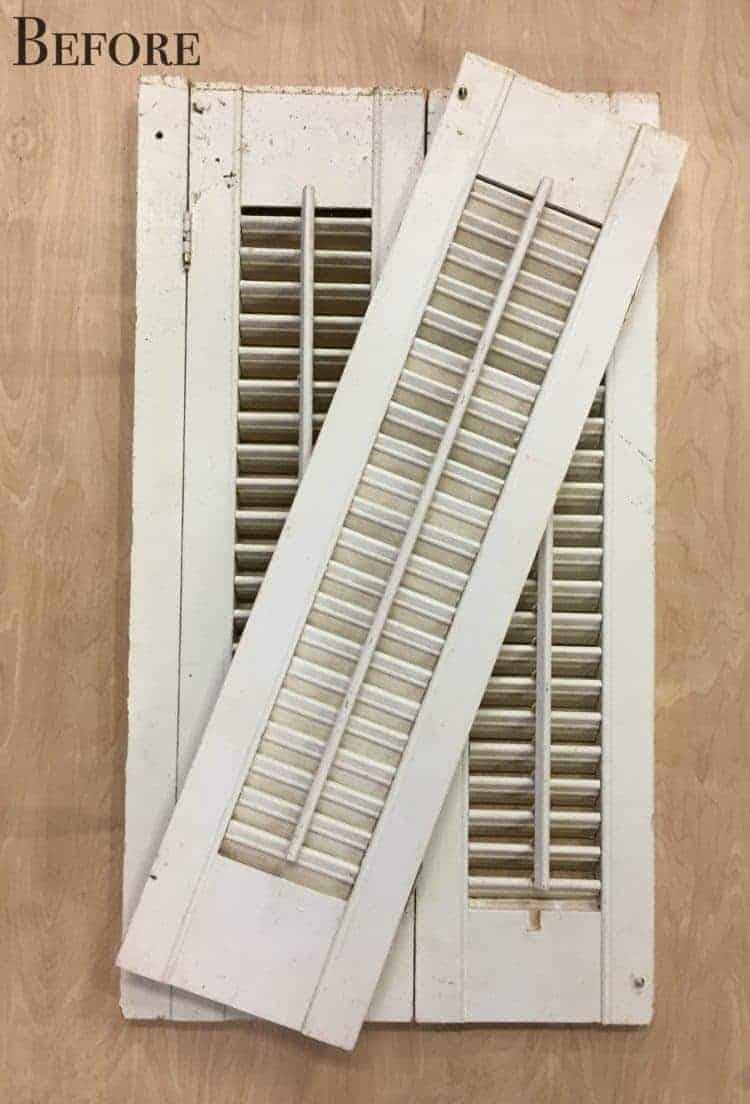 The first thing we did was remove the hinges. 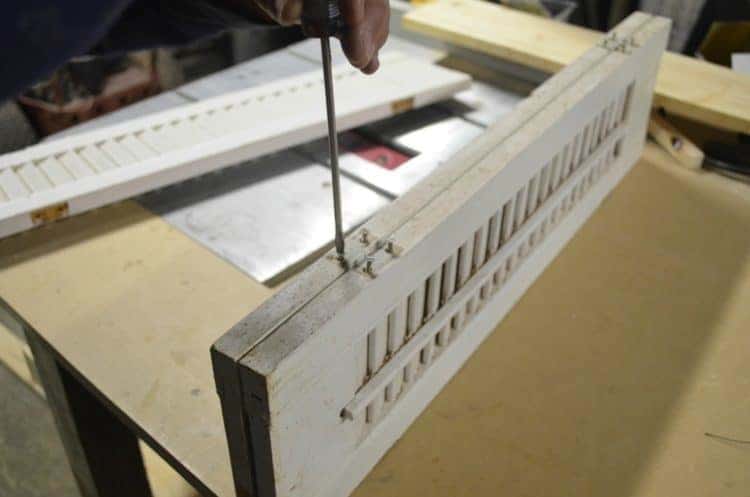 Next, we lined up the shutters and connected them together using wood glue, scrap 1/4″ plywood, a bar clamp, and staples using the pneumatic staple gun. On the top end of the shutters, we attached the plywood strip about 2″ from the edge. That’s the side that we’ll cut the arch. 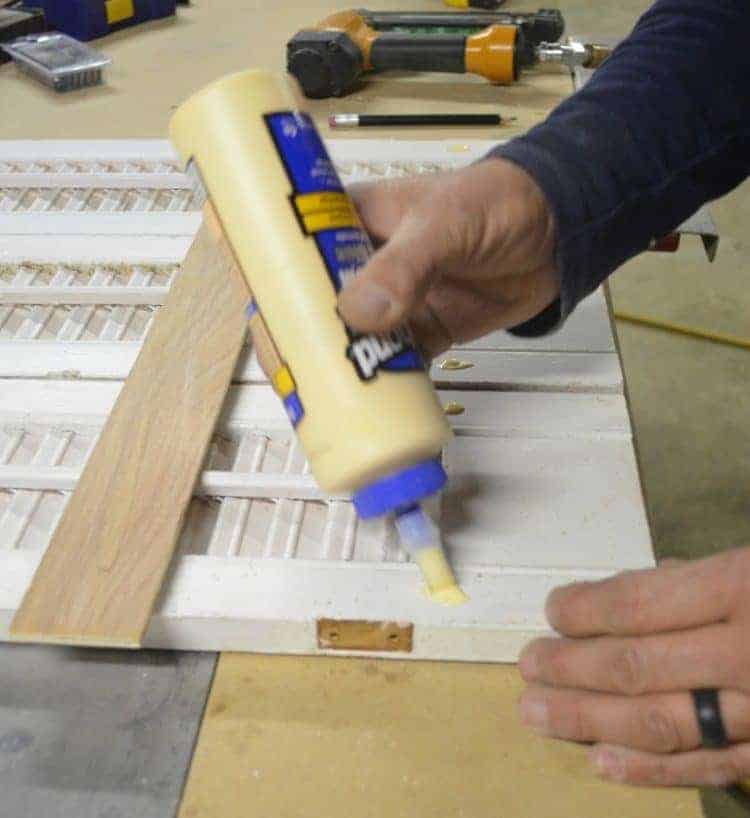 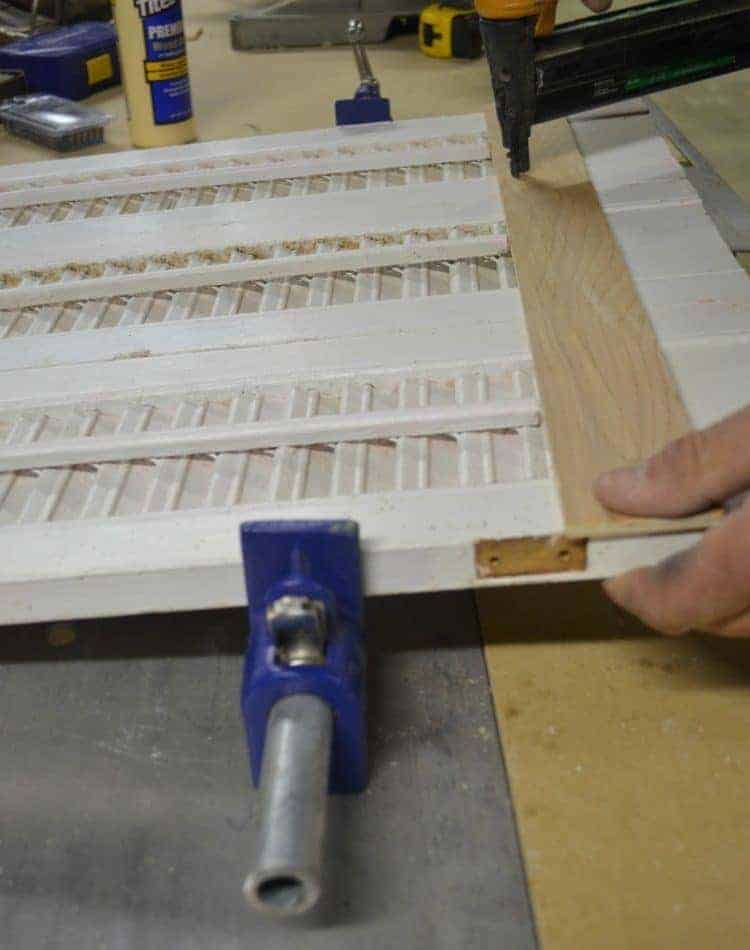 On the bottom side, we stapled the strip along the edge. 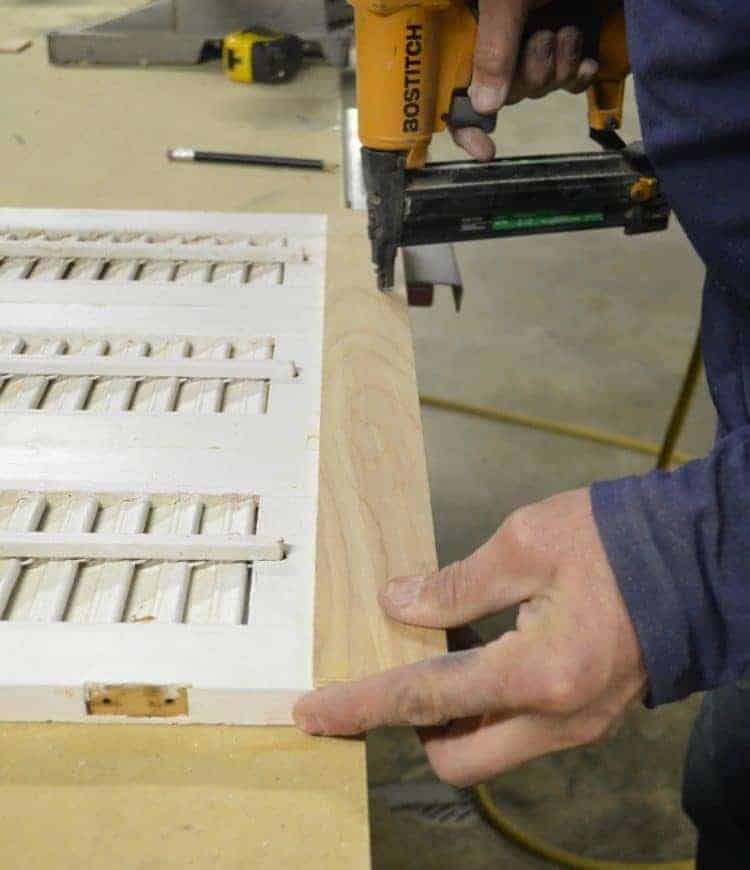 We traced a curve along the top of the shutters. 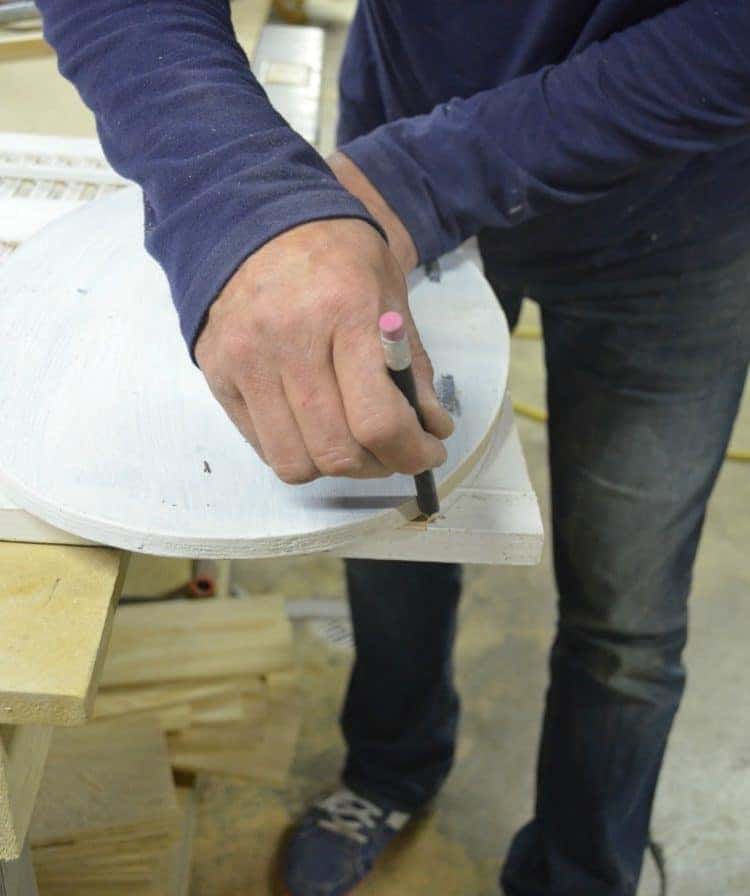 Then we cut the arch using a jig saw. 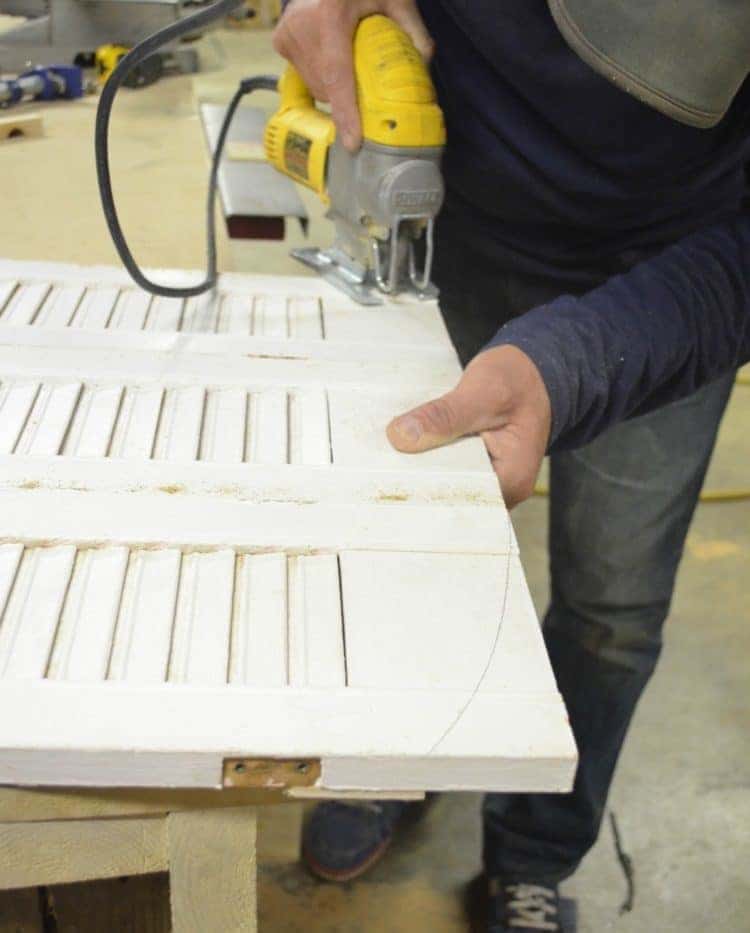 Now, it’s ready for some paint, shelves, and brackets! 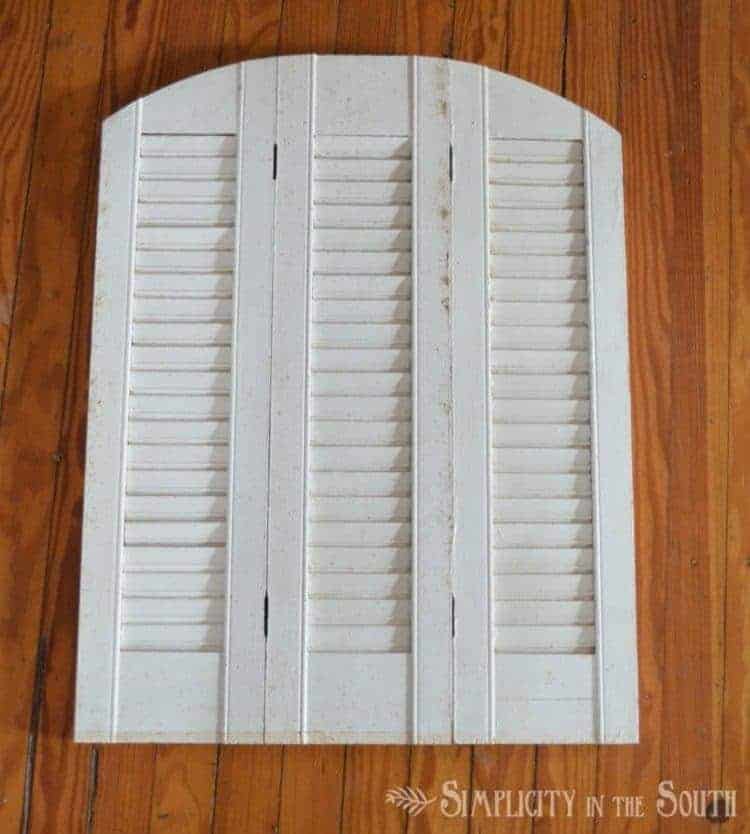 For the next step, we cut a 1 x 6 to make the shelves. I let my 11-year-old son get rid of some energy by giving the shelves a distressing with the hammer and a nail set. Have at it, Mason! Then, the shelves and shutters were given a couple coats of white primer. 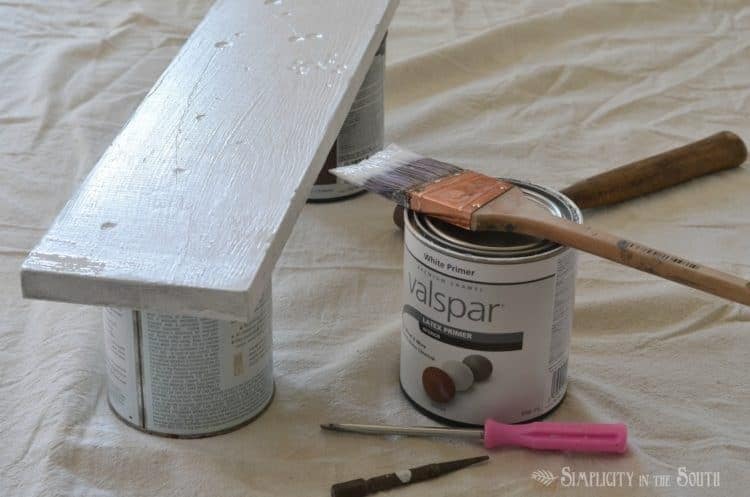 My experimental side wanted to try making my own antiquing wax, so I mixed up a batch and used it on the shelves and shutters right over the primer. 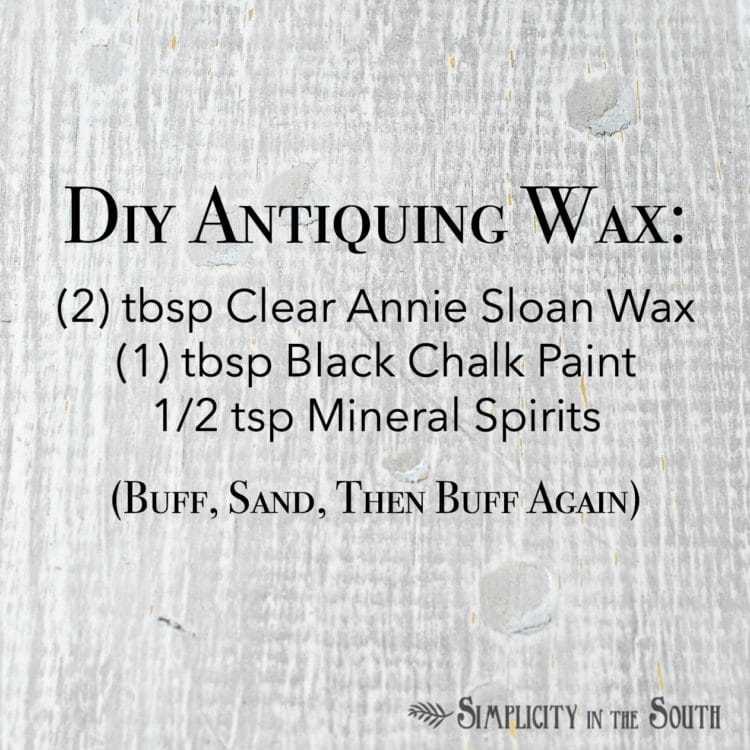 I normally use Miss Mustard Seed’s antiquing wax, but I’ve run out. I prefer hers because it doesn’t give the paint a brown tint like Annie Sloan’s Antiquing Wax. This DIY antiquing wax is the closest I could come up with on my own but I may have to modify it a little to get the right consistency.

Tip: If you get too much antiquing wax on your project, you can remove some of it with clear wax, mineral spirits or sandpaper.

I’m smitten over our catalog copycat version for a few reasons…this is authentically vintage and the proportions are just right for over the toilet. Oh, and we saved $252 building the repurposed shutters bathroom shelf ourselves! 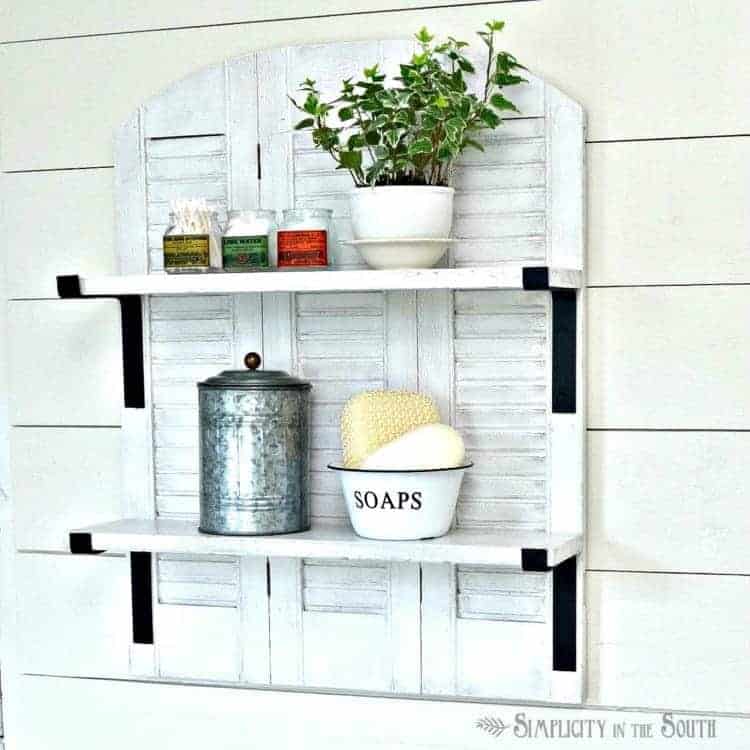 galvanized tin (sold as a set of 3) // enamel soap dish 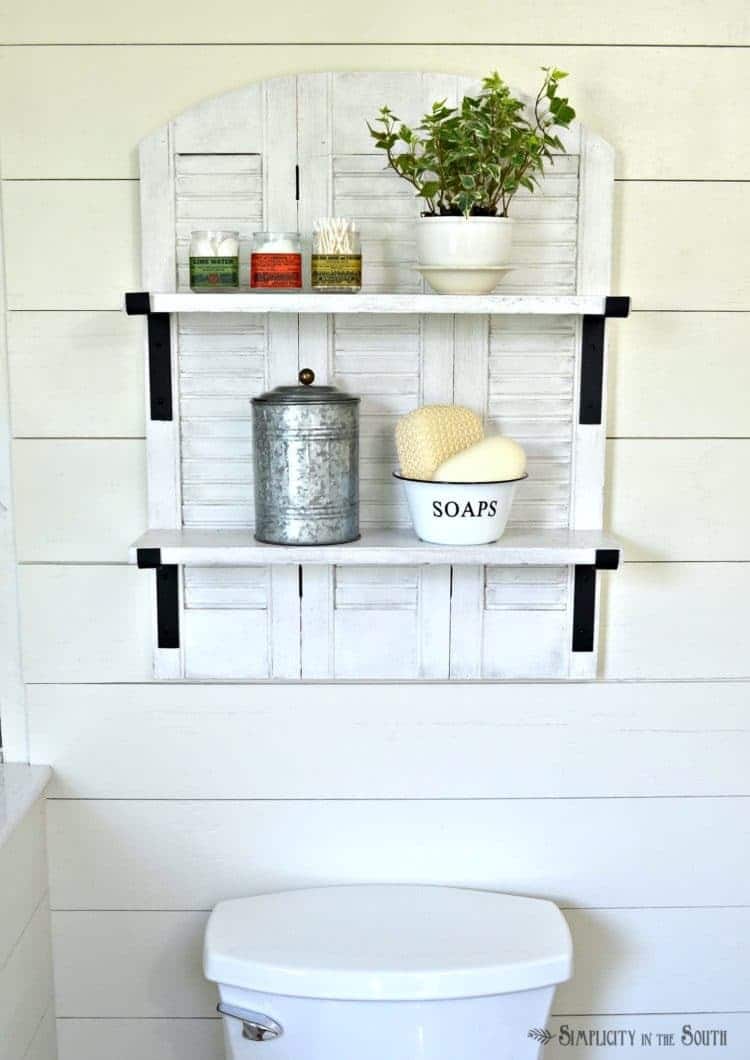 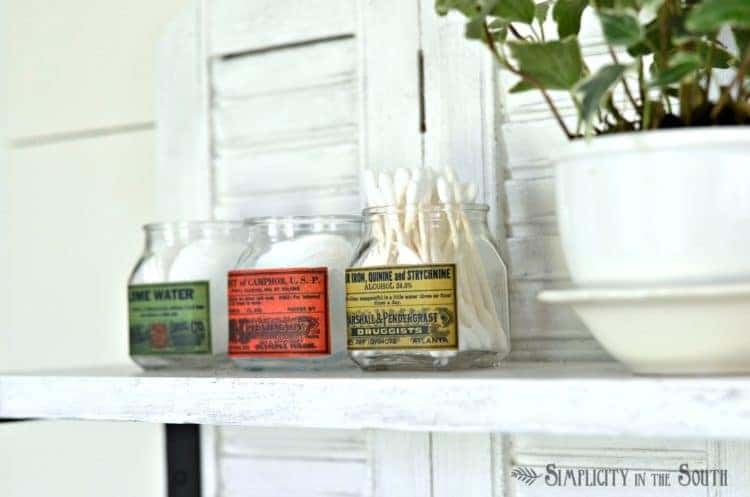 Click here to see how to make the decoupaged vintage apothecary jars. 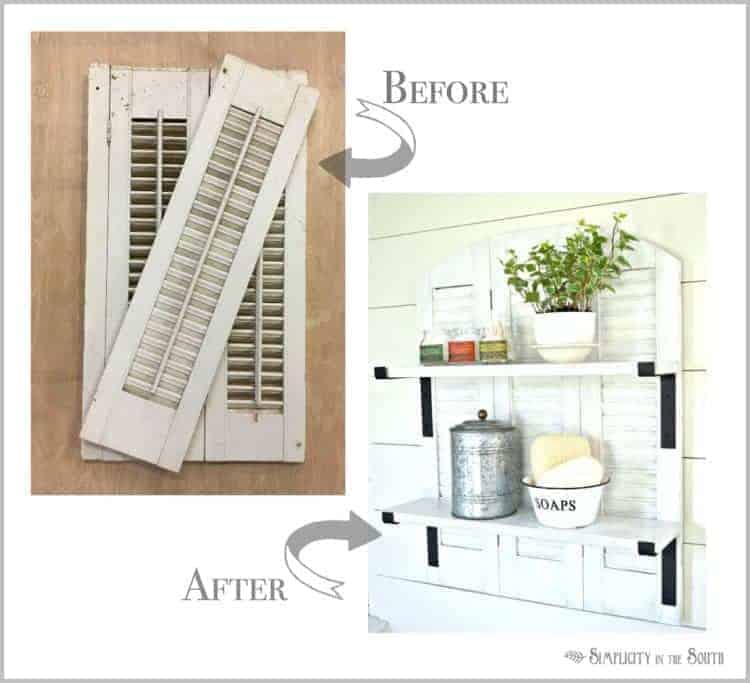 Lots of projects are going on behind the scenes over at our 100-year-old bungalow. This Ballard Designs inspired shutter shelf is going in our master bathroom and it looks awesome with the shiplap walls!

Head over to this link to see how you can make the DIY farmhouse-style metal brackets! 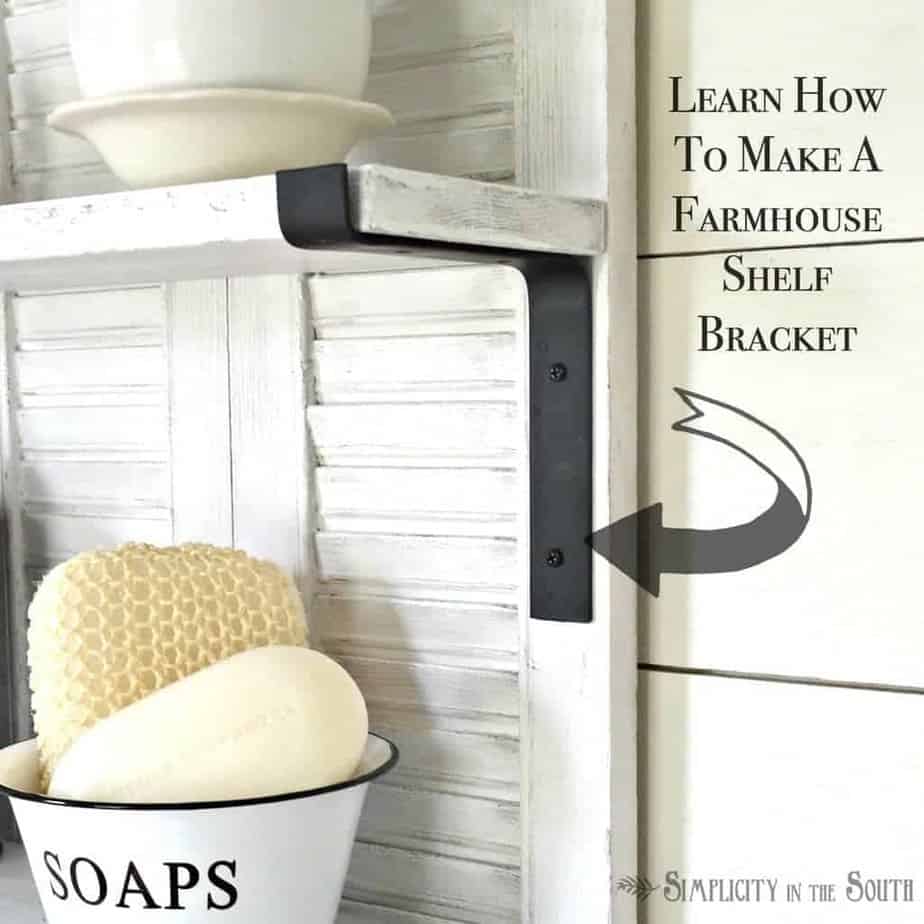 Do you love catalog copycat projects as much as we do?

Check out the rest of my catalog inspired knock off projects here!

I hope this inspired you to make your own bathroom shelf.

Previous Post: « Cheap and Easy DIY Wooden Poster Hangers
Next Post: How to Make Farmhouse Shelf Brackets Out of Metal »